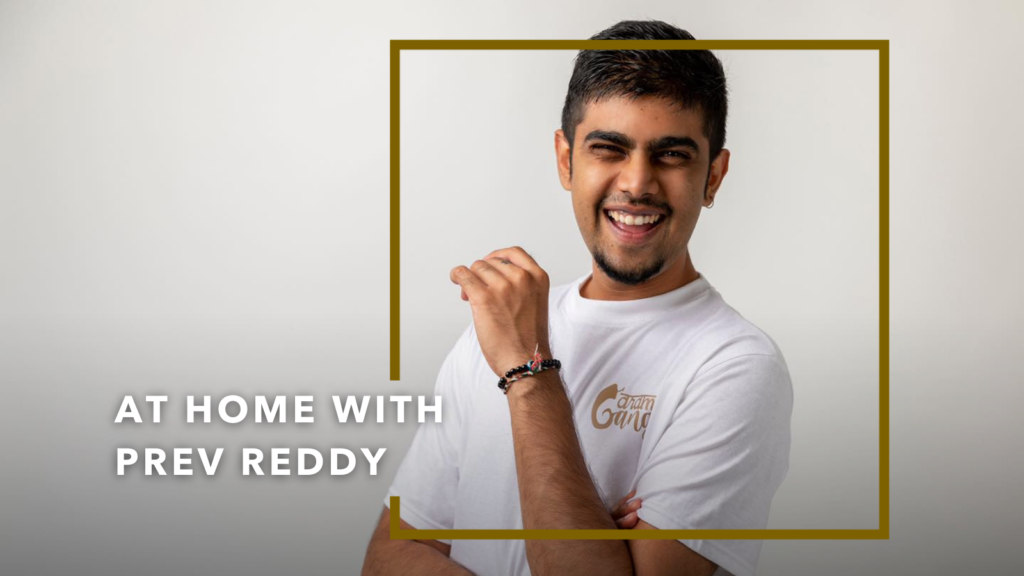 AT HOME WITH COMEDIAN PREV REDDY

When Durban’s Prev Reddy won the Nickelodeon Kids’ Choice Award in the African Social Star category, it was as his reinvented alter ego Aunty Shamilla, first created in his room here at home, she’s now a mainstay of his career.

From a young age, Prev Reddy knew that he was destined to be a star. After matriculating from Durban High School, he went on to study Film Production and Scriptwriting at AFDA.

It wasn’t until he reached college that he realised that standup comedy was something he was interested in. Once he understood the comic gold in staying true to his culture, Aunty Shamilla came to  life and her origin story is just as humorous as the character.

“It happened based off an argument that my mom and I had and when it went viral, that’s when I realised that we all have that one aunty in our family.” Since then, Prev has garnered over 140 000 fans on his TikTok. His skits are inspired by the women that have shaped him.

“I was raised by majority of the women in my family…so I think when creating her and when I started to really delve and flesh out the character, I just took their best and their worst qualities and created this full bodied person,” he says, “I think that’s why she resonates so much with so many people is because there’s a family member that they can see in her.”

The content that’s seen him move into his own apartment and book International Gigs is rooted in community experience but above all, his mum, Neerie Reddy, has been his muse.

“A lot of my time growing up I spent in the kitchen with my mother and that’s where I picked up all the mannerisms and the sayings that she’s had and that Aunty Sharmila has.” We joined the Mother-Son duo as they prepared a delicious Durban Fish Curry.

Prev’s offering now includes his first feature film which he’s beginning to promote. The family has a bonafide star.

“The thing I’m most proud of is my ability to adapt and change with this industry that’s always changing, every day there’s something new and you have to stay on top of it and stay relevant.”