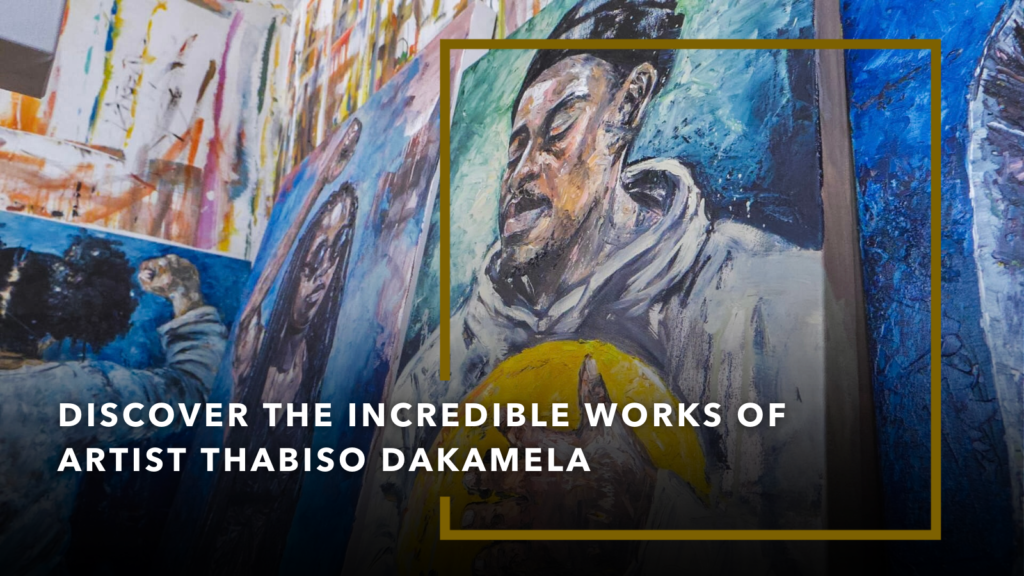 Artist Thabiso Dakamela sketches a portrait of the father of our nation.

The sketches and paintings of Thabiso Dakamela are a gathering together of his Ndebele and Venda heritage. They reflect a childhood spent with his maternal family in Zimbabwe, then getting to know his father and his South African identity. The result has made him a popular and proudly African talent.

A sharp observer and social commentator with an amazing gift in analysis of present surroundings and its influences on life. These observations of daily life are made even more relatable with the artist’s use of everyday materials.

Thabiso works in many mediums, but prefers acrylic, charcoal and oils to which he adds materials from everyday life like newsprints, bottle caps and the like… Blending abstract and realistic features in an impasto presentation to make it unique and peculiar.

Amidst today’s toils and hustles, he portrays positivity through women and children as these two social groups have been on the rise in recent decades.

His work is rich in short series and subtext thoughts that evoke feelings and emotions that encourage positive graces in his audience. The whole essence of living is to make someone else feel alive as well!

The impact he wants for his art is to know that it changed lives for the better and that in this work, people will always find what they need to endure.

When Thabiso is thanked for one of his works giving someone hope, he feels part of the future our former President saw.

“Nelson Mandela Day has been understood to be a day of celebrating an icon who represented resilience, who represented strength, who stood as one of the first and few black people who were able to stand against a regime and stand out and become someone that’s celebrated throughout the world. So it’s a day that when you reflect back, you think of endless possibilities for me.”

Thabiso did The Insider SA a huge honour of sketching an artwork to be won by our viewers.

“I’m doing a quick sketch of Tata and in this picture he’s looking up and sort of has a small smile on him. That to me is an image of a confident man… Whenever someone looks up, it’s symbolic of someone drawing strength from whatever is bigger than him, and that reflects on themself. He’s smiling and seems to be satisfied that he’s finally given his children what he’s been fighting for.”

Stand a chance of winning the signed and framed Thabiso Dakamela original of Tata Madiba. To enter, reply to our Competition post on Facebook, Twitter or Instagram. The competition ends 24 July 2022 and Ts&Cs apply.