Celebrated for our export wines, South Africa is steadily becoming known for a new generation of internationally appealing action movies, with a local flavour.

We got down to the basics of this appeal with our newest action hero, Jarrid Geduld, who stars in the country’s first ever action movie, Indemnity.

Geduld plays the role of Theo Abrahams, an ex-fireman suffering from severe post-traumatic stress disorder (PTSD) who, unable to return to work, turns to alcohol.

Becoming increasingly frustrated and volatile, Theo’s world is rocked when his journalist wife Angela, played by Nicole Fortuin, is murdered – and he is the prime suspect.

“I started acting when I was 11. I was lucky enough to be scouted by a production company back in 2003 to play the lead role of Twist, a Charles Dickens South African adaptation of Oliver Twist,” shares Jarrid.

Since then he’s been behind and infront of the camera on a number of local and international feature films and TV series.

“My favourite part of being in the South African film industry is seeing a group of creatives come together with the same common goal in terms of achieving something. That can be anything from feeling the responsibility we have as filmmakers to really making sure that when we do put out work that it does have an ability to plant a seed of change, that must be something that is positive and peaks the interest of the public as a whole,” explains the director and actor.

Audiences have seen Jarrid in the true-life human drama about Ellen Pakkies and he can now bring that dramatic experience to his action roles.

He’s a self professed action junkie who underwent intensive training for more than three months to meet the physical demands for his latest role so it was no surprise that we found ourselves with him at Zone 7’s recreational park for off-road biking, quads, go-karts and stock cars. 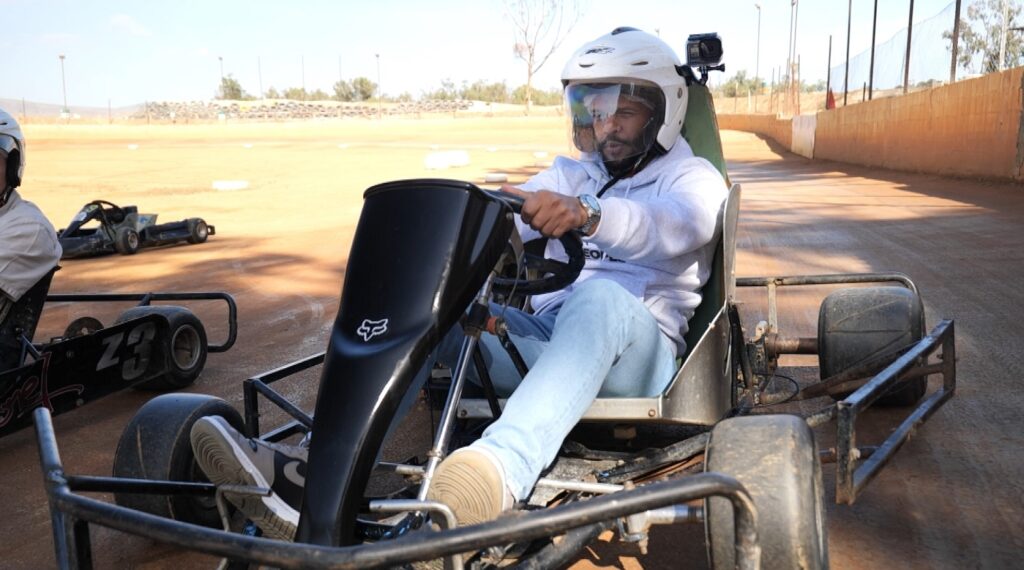 Jarrid shares that he’s been on many go-karting tracks in his life but this being the first time that he could go full throttle in the oval track had him excited and exuding a  confidence behind the wheel that can only have been helped by him doing all of his own stunts in that new thriller.

“Theo Abrahams I would say was a conundrum to me in the beginning. I initially didn’t think that I was the right fit for the role, but I found something human in him. I had to find something that resonated with me, and it was trauma. I believe that everybody suffers from some form of trauma, whether it be an extreme trauma or surface trauma. Ultimately, that to me was very special, because that is something that hasn’t been dealt with in the South African filming industry – be it television or film – so that for me was important to latch onto and put it up on the big screen.”

An ideal come-down from a character dealing with post traumatic stress. Jesse Pestana offers a similar refuge for animals from difficult backgrounds which provided the perfect opportunity for Jarrid to connect with himself and clear the thought processes.

“We are a rescue centre. We look after all sorts of animals here, from rabbits, sheep, goats to chickens. We also teach horse riding from beginner to advanced, and we also teach mounted archery and archery on the side. Most of the animals here are rescue animals, and most of them come from either abandoned shelters or simply from people who can’t look after them anymore.”

It was the perfect escape into nature for Jarrid to find quiet time and realign the mind and body while reflecting on his roots in Belhar and Eerste River and his international success.

“As a whole, international success isn’t just for me. It’s for the film industry and the industry of South Africa. It also plants that seed into young kids (minds) in various communities, whether it be the Cape Flats or the Kasi, that no matter where you come from you too have the chances of being on a global and international stage.”

After society has faced such odds, a thinking man’s action hero who knows the worth of getting back to the basics of life, is just what we need.