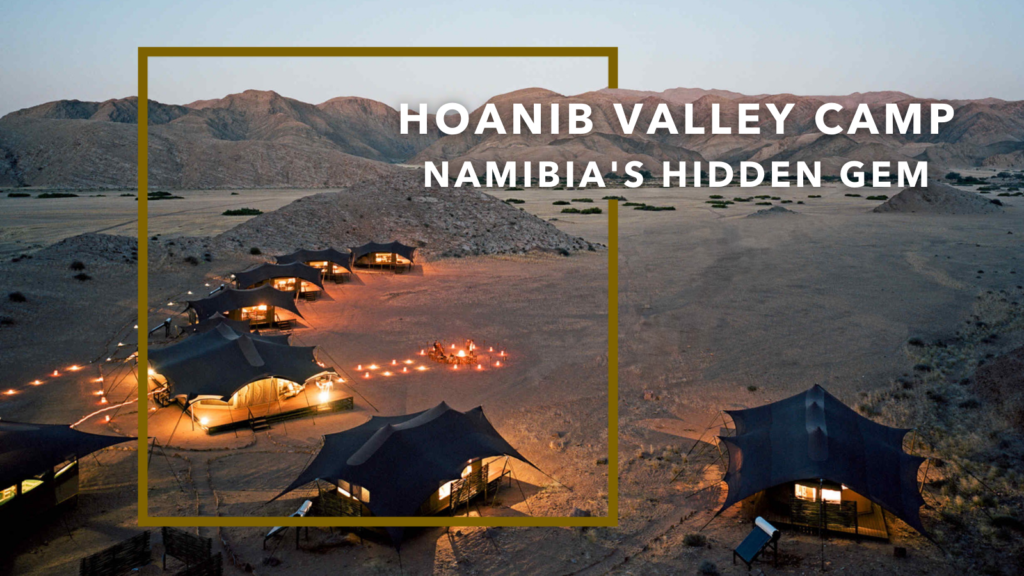 Explore one of the most remote parts of Southern Africa – the Hoanib River Valley in Namibia.

In our ongoing journey exploring the immense beauty Southern Africa has to offer, The Insider SA finds an adventure through one of Namibia’s most remote regions. At the Hoanib Valley Camp, they have defied the norm by creating a luxurious eco-oasis in the midst of one of the world’s seemingly most barren areas. 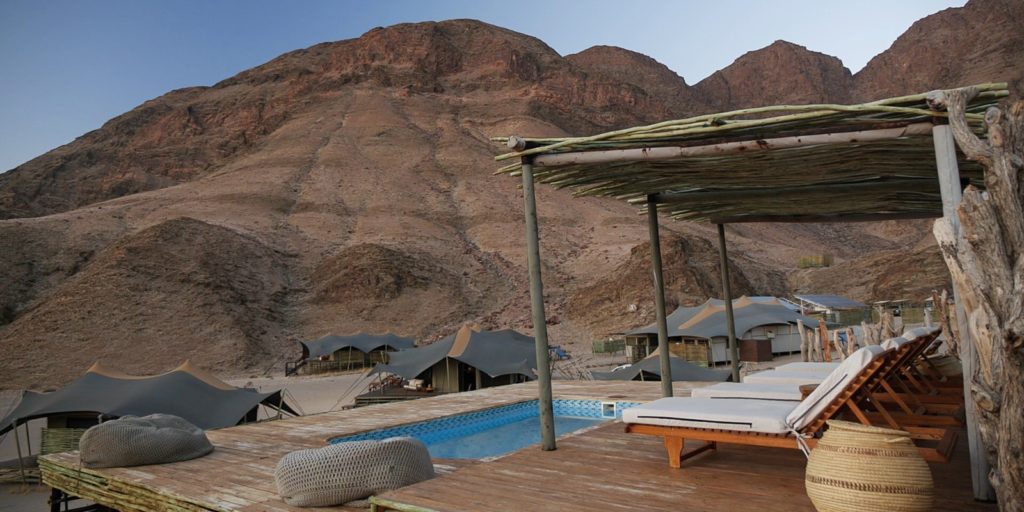 In their effort to tread lightly, the camp’s six tented rooms are built on decks of wood, bamboo, and a composite of 70% recycled material. All of the camp’s products, including the baskets, chairs and tables, are sourced locally and made by the local people. The camp is 100% solar powered and built elevated from the group as to not disturb the nature below.

Manager of Hoanib Valley Camp, Ralph Dantu explains, “The whole idea behind the construction of the camp was to have the most minimal impact on the environment.”

With the extraordinary geological formation of mountains behind the camp, and the ancient river that runs in between, the Hoanib Valley Camp was not short for inspiration for their luxury accommodation. It’s this rugged landscape that served as the muse for the camp’s creation. Ralph explains, “The camp was built to blend in with the mountains behind it. It’s like a hidden gem.”

As the sun sets in the late afternoon, guests can witness the changing colours of the mountains and spot the roaming wildlife in the desert, including the elephant, oryx, and springbok.

The team at Hoanib Valley Camp comprises of locals from the community. Their staff and guides can offer expert first-hand knowledge of the area and share their passion to all visitors who come their way.

Guide, Timo Kasaona shares stories from his childhood in Hoanib saying, “Being a child and growing up in a place like this wasn’t hard. I’ve enjoyed it. Now, being a guide has been a dream come true to share my heritage and this open, beautiful place with people from all over the world.” 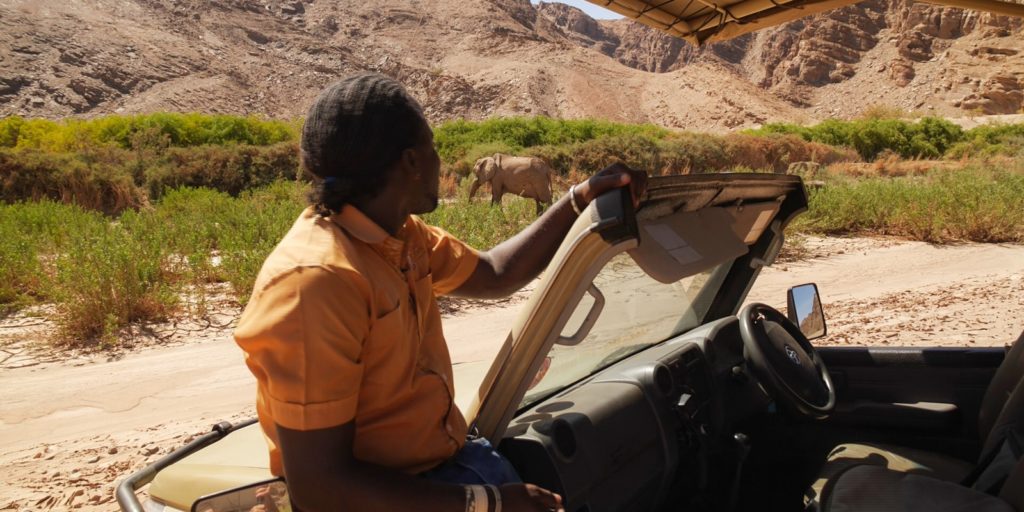 In this area of North West Namibia, traces from the Himba can be found. As a semi-nomadic community, the Himba will go where ever there is better grazing for their livestock, explains Timo. The Himba people are estimated to have a population of around 50,000 and form part of Namibia’s indigenous population, occupying parts of Northern Namibia, as well as Southern Angola.

The land surrounding the area is harsh, making life challenging, but the opportunity to stand amongst the seemingly endless dessert serves as a reminder of the power and might of nature.

“It’s so quiet around here that the only sound you hear is the wind blowing. That’s how we say nature talks to us,” shares Timo. “Other than that, there’s no sounds and no noise. You’re all by yourself.” 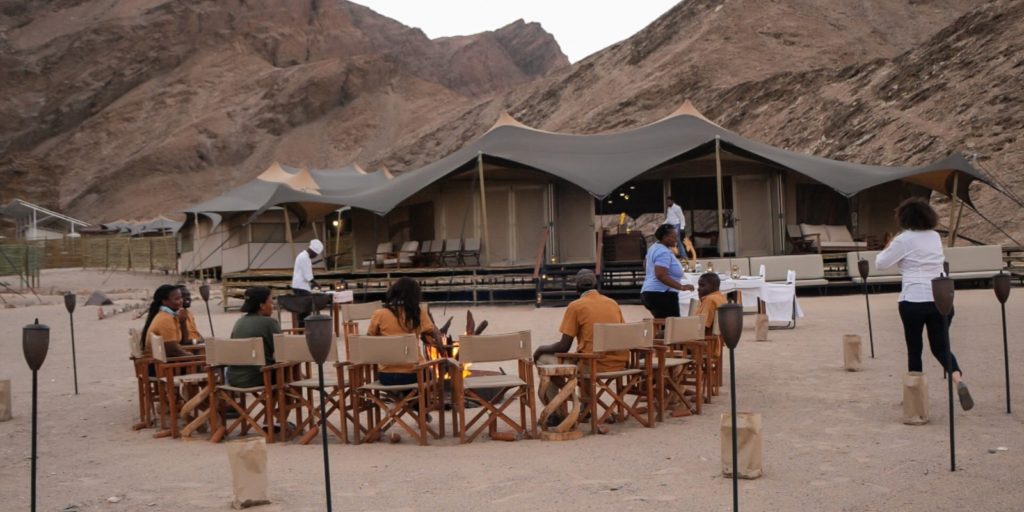 Along the plains, you may also first ‘fairy circles’: a mystery of the Namib Desert that has stumped scientists for decades. There are multiple theories to these fairy circles including termites poisoning the grass, dead bushes that leave impressions in the earth, or even aliens. But, as Timo explains, “The locals say it’s the footprints of God.”

Despite the harsh climate, there is still wildlife in the area, including the dessert-adapted elephant which can be found roaming the riverbeds in search of the occasional spring-fed waterhole.

Timo shares a revolutionary fact about these desert elephants: “the female elephants have no tusks.” When poaching started increasing in the ‘70s and ‘80s, the females started adapting for survival. Since then, conservation efforts have intensified to protect the elephants and other wildlife in the area. The Giraffe Conservation Foundation have played a major role in this conservation.

Allowing yourself to truly experience the raw beauty of nature is one of life’s unique pleasures. At Hoanib Valley Camp, you have the opportunity to do just that.