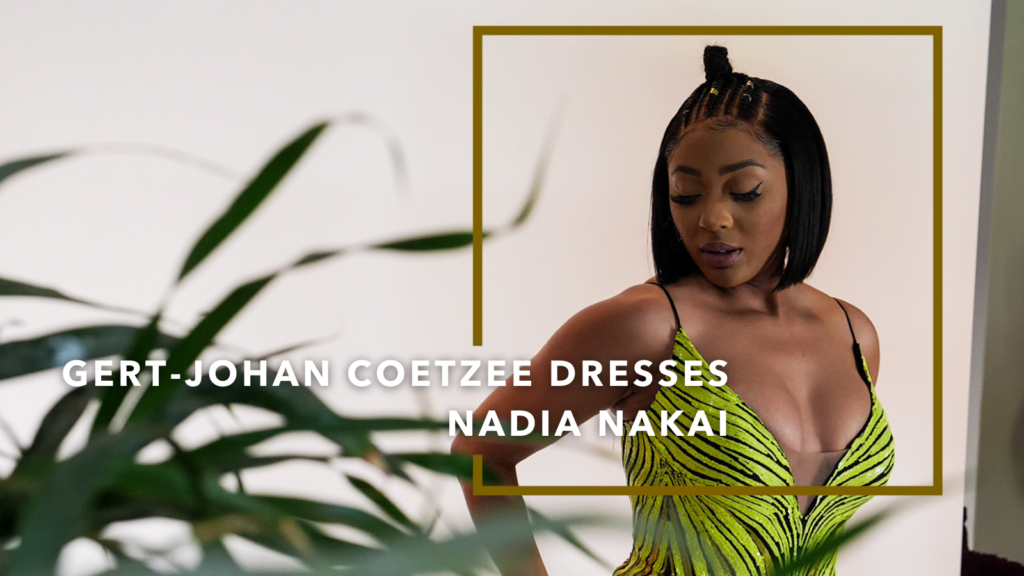 Celebrate 10 years of iconic looks with one of the countries’ most sought-after designers, Gert-Johan Coetzee, his life and business partner Vicky Visagie, and celebrity client Nadia Nakai.

Gert-Johan Coetzee is one of South Africa’s most celebrated couture designers who sets himself apart by building fellowships with those he creates for. His signature style is sought-after by esteemed women in business, entertainment, politics, and even royalty. The Insider SA caught up with Gert and his husband, Vicky Visagie, at their home and studio in Johannesburg.

Reflecting on 10 years in the industry, Gert shares his story of how he became a fashion designer to the stars. “Fashion has always been my thing, even since I was small boy on the farm in Koster in the North West where I grew up”, Gert shares. “I’ve always had a fascination with glitz and glam and cameras. I’d dress my pencils in little tissue paper dresses and my sister’s dolls in these elaborate ballgowns”.

Gert jokes that before his family’s curtains were the next thing to be cut up, his parents suggested he go off and study fashion. It was here when Gert met Vicky, who was just about to pursue his studies as Gert was finishing off his own. 15 years later, and the couple is now married, in business together, and more in love than ever before.

Vicky shares, “We’ve been inseparable since then”. Gert adds, “We’re very much attached at the hip. We work together, we play together, we do everything together”. 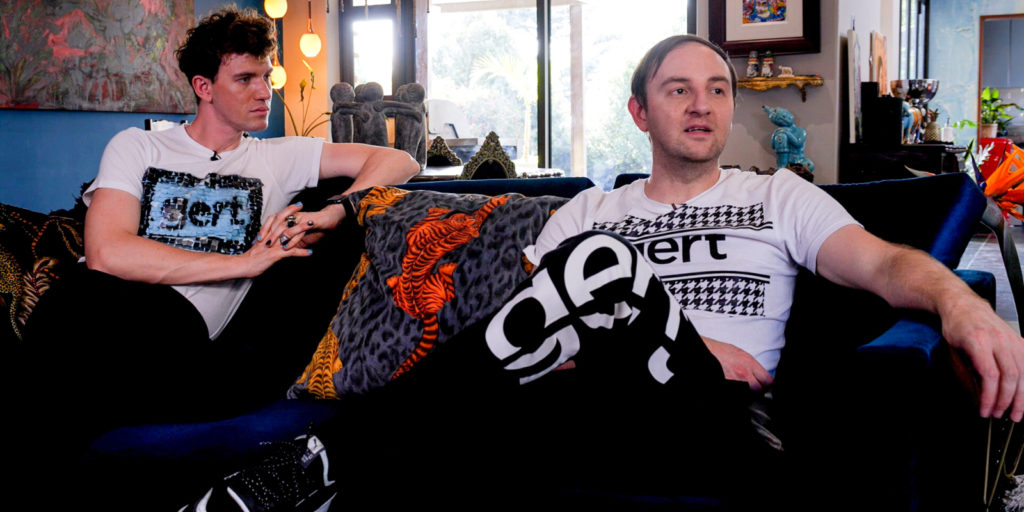 When he’s not creating, Gert enjoys the downtime in his home with Vicky. The couple characterised their home by blending strong statement pieces with personal touches to create a relaxing and inspiring space for mind, body, and soul.

Vicky shares how they’ve learnt to collaborate, blending their two styles to create their home. Gert explains, “While Vicky likes eclectic things, I like more baroque mixed with modern”. The living room is where this collaboration comes to life with unique paintings, inherited marvels, and rare antique finds. Most of all, Gert and Vicky have been inspired by their travels and the oriental aesthetic of Asia.

You’ll find where the magic happens inside Gert’s Shop Gert Studio. There’s a ready-to-wear section to browse through if you’d like to quickly pick up a show-stopper garment. In the office is where Gert creates all his couture gowns, wedding dresses, and custom pieces.

To celebrate his 10 year anniversary, Gert hosted a retrospective in the Diamond Walk in Sandton City where all of Gert’s most iconic works were displayed. These are the pieces that have flooded social media, appeared on the screens of Top Billing, and walked across international pageants. “This was such a great opportunity where the public could actually go and see the dresses up close”, Gert shares. From Zozibini Tunzi’s dress to Oprah Winfrey’s kaftan, Minnie Dlamini’s wedding gown, and even Somizi and Mohale’s wedding outfits.

For his next project, Gert dresses friend and rapper, Nadia Nakai – a sensational South African rapper and songwriter. Gert and Nadia Nakai’s fellowship is built on mutual admiration for each other’s art.

Gert shares, “We’ve worked together many times and I think she’s one of my favourite people to dress just because she brings a different edge to fashion. I love that she’s a rapper and she’s got such a sexy, uber beautiful image. As a designer that inspires me”. 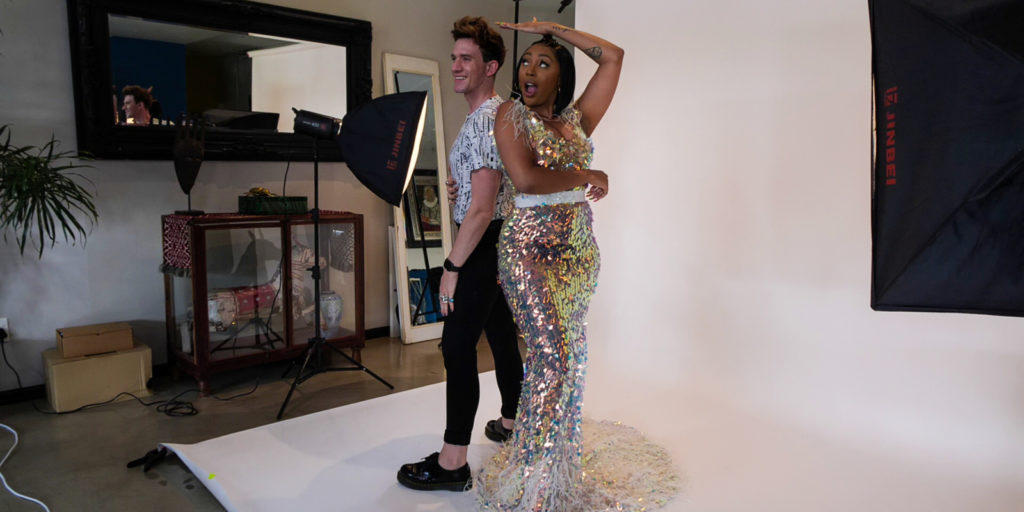 Nadia adds, “The reason why I like Gert Designs is that he understands my body and my style. I like being glam but also have a bit of a sexy, risky side and he knows how to merge those two. Another thing is that he inspires me. That’s what you want from a designer – someone who ignites a different side of you style-wise”.

Gert’s first iconic dress for Nadia catches both the light and everybody’s attention and was designed for Nadia to wear while presenting a VMA Award – a milestone for both South Africa, Nadia, and Gert as he becomes a part of fashion history. For another hallmark moment in Nadia’s career, Gert’s designed a striking yellow gown for Nadia to accept two AFRIMA awards in Nigeria. 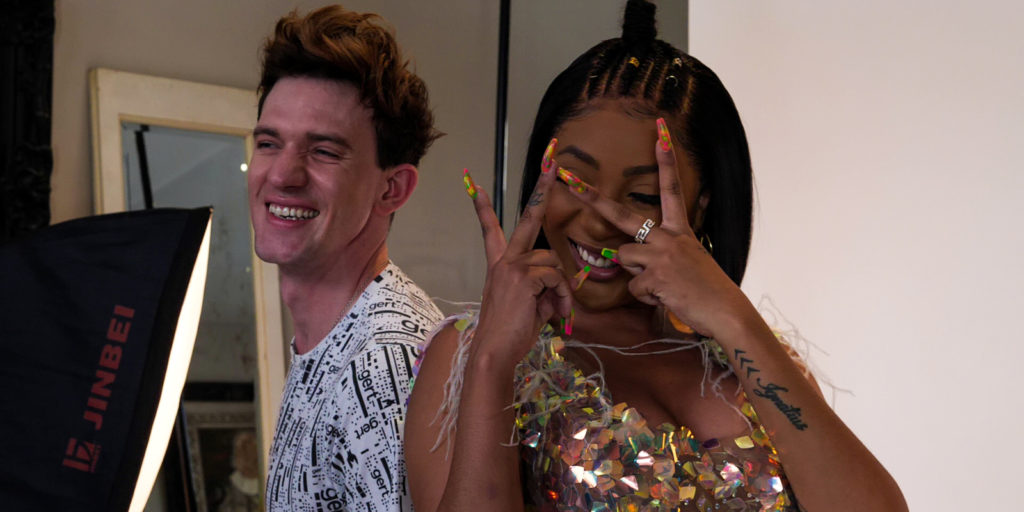 From fashion to fellowship, we celebrate 10 years of Gert-Johan Coetzee and eagerly await the next 10 still to come as we watch this fashion star continue to ascend the throne.